SANFORD — After shootings like the one last month in Parkland, several school districts are taking a hard look at their security measures.

The Seminole County Sheriff’s Office and school district feel a system they use called Mutualink is something that all schools districts across the state should implement.

Captain Rick Francis with the Seminole County Sheriff’s Office did a test run of the system to show how it instantly connects various emergency response agencies with just the click of a panic button.

“More importantly, we know who is calling, we know what emergency they are declaring, and we know where they are,” said Capt. Francis.

When an emergency comes in, Mutualink allows for video, radio communication and GPS location to be shared with any agency Seminole County connects to access. 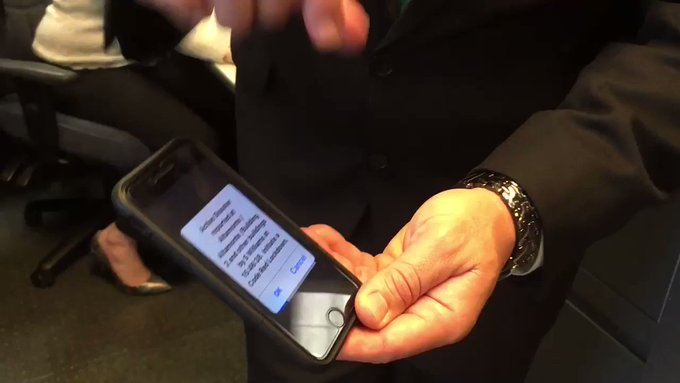 Teachers and staff in @SCPSInfo are able to press a panic button via the app @RaveMSafety and through a security system called @MutualinkInc have emergency crews dispatched immediately. Spoke to @SeminoleSO about why the system works. @MyNews13

“Once that event is created, I can share that video with other first responders. I can share it with hospitals,” said Capt. Francis.

“A responding officer needs to see what he is getting into, it is the best way to respond,” said Jeff Doran, Mutualink Senior Project Manager.

The system is not just used in schools. In Central Florida, it is used in airports, hospitals, malls, businesses and even theme parks.

“They are acting as a peer in this community. They are not subordinate to anybody, that we are all in this together as a community,” said Doran.

“So how it works is, [teachers] hold this button down for 1.5 seconds. It does the counterclockwise sweep,” said Capt. Francis.

The app allows teachers and staff to send an alert for emergency situations like active shooter, fire, medical emergency and other issues.

“We wanted this technology to save lives. The second reason we deployed it here, we wanted to put that ability to declare an emergency in everybody’s hands, but third, and more importantly, we want to have quick resolution to the problem,” said Capt. Francis.